What are the Dances of Universal Peace?

These simple circle dances, which can be great fun and yet profoundly moving, are inspired by the wisdom and sacred phrases of the worlds' spiritual traditions. Essentially they are a form of celebration and meditation through sacred sounds and devotional movements. Through dancing together in a circle and singing sacred phrases such as Kyrie Eleison (Christian); Shalom Aleichem (Jewish); Om Namah Shivaya (Hindu); Kwan Zeon Bosai (Buddhist); La illaha il’ala (Islam) we create an atmosphere of peace and unity. 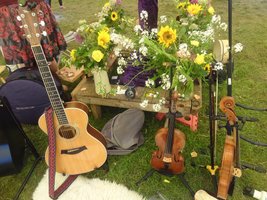 History of the Dances of Universal Peace

Originally created by Samuel L. Lewis (1896-1971) the dances were inspired by his Sufi teacher Hazrat Inayat Khan and American dance pioneer Ruth St. Denis. They were first danced in America in the late 1960s when Lewis was also in his late sixties. Lewis was acknowledged as a Sufi mystic and known by his students as Murshid S.A.M. (murshid is teacher). Additionally he was a lifelong practitioner of Zen Buddhism and a Zen Roshi, having studied for many years with Nyogen Sensaki; he had a Hindu guru, Papa Ram Dass; he taught Christian mysticism; and, Jewish by birth, was well versed in the Kabballah, Jewish mysticism.

Murshid S.A.M. also studied mystical and spiritual forms of dance throughout his life with Ruth St. Denis. He was a keen folk dancer and originally went dancing to overcome a sense of shyness. Following Hazrat Inayat Khan and the “Unity of religious ideals”, that the truth at the heart of all religions is the same truth, Lewis envisioned a dance form which would embody this ideal and which would allow people to directly experience for themselves such states as peace, joy, harmony and unity. He saw the Dances of Universal Peace as a form of “Peace through the arts”, a way of sharing the blessings of peace throughout the world and within each individual. Since then the dances have gradually spread throughout the world.

While translations of the phrases are given below, many sacred phrases are capable of different meanings and different levels of meaning; and ultimately the meaning for each of us is how they resonate in our own being and what feelings and sensations arise. Really feel the sound in the body. Stay in the heart rather than the head. Other phrases you may find are strangely familiar.

Bismillah Er Rahman Er Rahim ( Arabic, Islam) – We begin in the name of Allah who is mercy and compassion. Or we begin by means of the Entire Unfolding Cosmos from whose womb is born the Sun and Moon of Love.

La illaha el Allah Hu, or La illaha il Allah Hu (Arabic, Islam) – There is no reality except the Oneness. Remembrance of the One Being.

Abwoon d'Bwashmaya (Aramaic, Christian) – First line of the Lord's Prayer. O Thou the Breathing Life of All, Creator of the Shimmering Sound that touches us.

Om Sri Ram Jai Ram Jai Jai Ram (Sanskrit, Hindu) – O God who is both truth and power, personal and impersonal, victory to thee, victory to thee. Also a call to victory for the spiritual self.

Kwan Zeon Bosai (Korean, Buddhist) – Kwan Yin, the Bodhisattva of Compassion – She who hears the sounds of the world and accords them mercy. Bosai is Bodhisattva.

Om Mani Peme Hung (Tibetan, Buddhist) – Hail to the jewel in the lotus. This mantra embodies the compassion and blessings of all the Buddhas and Bodhisattvas.